Musings on a Move

Charlotte. My hometown is green and peaceful. There are tons of memories, and there are people who respect and love me in abundance. I love it, and I find solace there. Like a cemetary.

Los Angeles. Is smelly, and dangerous. It’s full of risks and overwhelming challenges. There are no guarantees, and fewer promises. Its hard. Like life.

That was the entirety of our conversation. I was on my Delta flight, flying from Minneapolis to LAX, to work a week at the Magic Castle. I was seated in my aisle seat, and the young gentleman was assigned to the middle. I had boarded early, and he was asking to get by so he could get set for our flight.

I plugged my music into my ears, settled back for the 4-Hour flight, and let my thoughts drift. It’s the way I cope with long flights. Turbulence doesn’t really bother anymore, and it’s become rather routine. The modern Life of a traveling showman, eh?

About twenty minutes in, I saw him fading: sleepily leaning forward and catching himself.

And then … He succumbed. He fell asleep and slowly leaned over, tucking his head onto my shoulder. For a moment, I didn’t quite know what to do. Window seat dude gave me a bemused look like … ‘wow, glad it’s not me.’

I thought about waking him up, but … Something just told me to let it be. He wasn’t hurting me, he wasn’t being inappropriate, he was tired. Weary.

And man, aren’t we all, these days?

So when he shifted in his sleep and put his hand on my chest, I didn’t mind. Apparently my cuddling abilities are legendary.

He slept, he found some peace for a couple of hours, and some human contact. Contact is good for the soul, right? I mused on why he might be making  this journey, and  what strength he might need to gather on his way. He found some peace, and I was fortunate enough to be the ‘pillow’ he found it on.

Shortly before we began our descent into LA, he sat up and then slowly came awake. I don’t think he ever realized what had happened.

It felt good to be comfortable being a comfort.

I was sitting at a public table with a group of friends, talking about magic and kangaroos, when this enthusiastic gentleman stepped up and in a loud voice announced: “I really loved that column you wrote about the prostitutes in Berlin!”

The immediate silence was delicious. 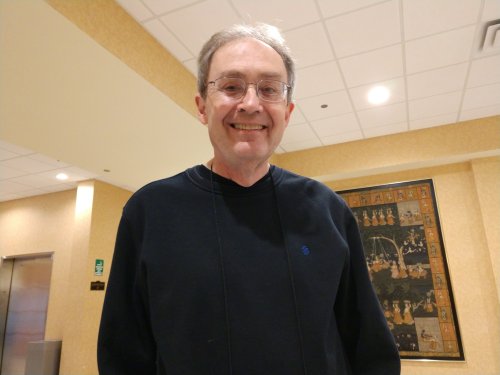 This week I am at the Genii convention in Orlando, Florida. I thought I would keep you posted with a few highlights. I don’t attend many conventions, but this one is kind of special.

Upon checking in at registration, I was greeted by Jean Solomon, who was once part owner of the magazine, as well as publisher, editor, and now proofreader. She’s been with them for over two decades. She treated me very warmly, said she was a big fan of my work, and informed me that mine was the only column that ever brought her to tears. What an incredible compliment, what an awesome way to start this week.

Doubt truth to be a liar; But never doubt I love.

And then it was simply time to start. The house lights went down, the stage lights came up, and we simply did our jobs. Some of the memories are faded, but there are some crystal-clear photographs in my mind.  I had the advantage of seeing the stage and the audience through the entire program. I won’t be able to fully capture the experience of being there, but I can give you my perspective, and my feelings. Here’s how the show looked to me, sitting up in the box, stage right.

Tuba Heatherton opened with the Monday Night Tease theme song, and Lili took her place in the MC spot. She’s funny, brash, offensive, and the best damned MC I’ve ever worked with. Bo Toxic got things going with leather and Joan Jett. All punk attitude and heavy-metal sexuality. Oh Olive reprises a Charlie Brown number, portraying Linus … I’ve never seen a ‘security blanket’ live up to its name quite like that. As she walked off stage, she screwed her thumb into her mouth and ruined my childhood.

Rob … Rob the Balloon Guy. I’m not going to describe this act, because you need to see it live, and i hope you’ll get the opportunity. I’ll just say that this creative use of folding chair and balloons will never be outdone. I’ve seen it three times now, and I laugh myself to tears every time. Caramel Knowledge portrayed Nick Fury like Samuel L. Jackson only wishes he could, and Egypt Black Knyle closed out the first half with ‘Question of U’, one of my favorite deep-cut Prince songs. (Christ, I miss him.) In the midst of all the awesome shenanigans, Patrick the Bank Robber ‘called’ Lili to wish her a fond farewell. It was funny .. but i could feel her holding back emotions.

Intermission and i got a few minutes with Andrea, which helped me focus. The show was reportedly going as well as I thought it was, and she seemed quite happy. I probably wasn’t good company, because … well, reasons.

My friend in atheism Heather Henderson opened set two with an unabashed act as a nun, using multimedia and ‘Dear God’ as her music. This was the point when the show really pulled me in. Eddie kept checking to make sure I was cool … love that clown. Nikita Bitch Project did her killer Godzilla act, Eddie owned the room in the way only he can, and Sheila Starr Siani put me in a spiritual mood with another powerful Prince song: ‘Thieves in the Temple’.

Interlude, only in my head. This is a room full of love. Everyone here is supportive and giving and SO enthusiastic about everyone else doing well. No thieves in this temple, Sir. It’s brimming with love and talent and beauty.

Matt Finish closed out the musical numbers with the most erotic version of ‘Dontcha’ I’ve ever witnessed. The attitude, the confidence, the magnificence of his performance made me almost wish I didn’t have to follow him. Seriously, people, do you see how beautiful he is? How flawless his body is? I’m supposed to go and be vulnerable and peel off my own shirt after that guy? I … can’t. I’ll do a few card tricks and pay tribute to Lili and get everyone really happy and use my skills as a speaker and magician and just … not do the Naked Truth. I’m ashamed.

Later, in a quiet moment, I asked Matt why he didn’t write anything on me. His reply was: “No one has ever said anything that could hurt me.” Damn, son.

I was introduced. I don’t remember walking on … I know I did card tricks and I remember realizing that I had to do ‘Naked Truth’. This room, this moment, was exactly the reason i created the thing in the first place. I need to give this to Them. I need it for me, and I’m the only one who can do this. I stripped. I stood, sweaty and nearly naked under unforgiving lights and my music played and I stretched out my arms and I let them come. And I felt fear in the mass of people around me. And sharpie ink stings my skin, so I felt each word burning. And they wept, adn i found my voice trying to comfort them. “It’s alright, I’ve got you. I see you.” And some couldn’t come, it was too much, too real, so they stayed in their place and lent me strength and some came after and told me their words. They were not ready to burden me fully with them, but I had helped in the simple act of helping the others, and they could bear their burden a little easier.

Maybe it sounds woo and new-age or silly. But I can just tell you it was real. To everyone in the room, and especially to me, with my shoulders heavy and my skin on fire, it was real. It was love.

They gave me their fear and they gave me their pain and, when they were done, I spoke and lifted the hearts back to celebration. Couldn’t tell you what I said, but the right words were there for me. (On stage, they always are.) Eddie unleashed a barrage of balloons and the music came up and there was dancing, and Lili was snapping selfies with everyone, tears in her eyes and that dangerous grin she has.

I said goodnight to my friend, and wished for a bit more time. So many things to talk about, but –

We danced, and then we feasted, and we bragged and we complimented and we took photos and made silver until the wee hours. The doors closed, and we solemnly walked toward new adventures.

I cannot imagine how she feels, I can only try to be a friend and a comfort. She’s not done, not by any means, just because this chapter is closed. Lili and i spent most of the next day discussing everything: the past, the future, how to survive the present … she recorded some of it. You can listen in here.

Monday Night Tease affected thousands, changed the world for the better, and we put her to bed right. I’ll carry this honor and tell this story for the rest of my life.

And I swear it’s all true.