In the search for who you are it is often the mind and the heart which are conflicted. The desire to accomplish the extraordinary dreams your heart sings to you versus the practical side of taking care of your responsibilities.

When these internal debates begin, remember that there is a third party: your hands. To be more precise: your ability. There are many things my heart would love to do – but I was quite simply born without the ability to do them. There’s no shame in this, but it must be taken into account as one walks the road.

The entire experience left me wanting to do more. To dig deeper into my mine and deliver more comfort. Comfort. Is that really the word for what I was doing? Every other word I thought of using seems pretentious, and I don’t want that image to get in the way.

The final day was not as intense as Tuesday. They focused mostly on financial instruction and communication between couples and children. I did get the opportunity to speak individually with a few special people.

I was lucky to serve those who serve. To share my words and my talents, to make them laugh and ease their burden if only for a short time. I’ll be grateful for the rest of my life.

There’s an image I want to leave you with, and it’s not exactly pretty. One of the presenters showed a video of troops returning home. The families and friends waiting for their loved ones to land. There was a party, hugs, kisses … laughter and tears and long embraces. There were infants and toddlers meeting their fathers for the first time.
And then there were a few warriors standing alone on the fringes. “I don’t have anyone coming.” “My parents couldn’t afford to make the trip.”

I was suddenly very cold. The chill hasn’t left.

All I can offer you … all of you who served and are serving … is my sincere thank you.

I pray you’re not alone.
I sincerely hope that there’s love where you are.

He sat on his parent’s bed, at the foot, so that the splatter would be bigger and cover both sides equally. In his mouth was the barrel of his father’s revolver. Pearl handles, expert engraving … really deadly, beautiful engine. He had taken it from it’s hiding place, loaded it and spent time considering the best delivery angle. He could feel the front site digging into the soft tissue on the ceiling of his mouth. He fully cocked the hammer and applied slow pressure on the trigger.
He was thirteen, and he was just done. Done with the pain, done with the abuse and the indifference of callous ‘loved ones’. Done with life.

And then a voice. Inside his head? In his ear? Doesn’t matter. Just four words:
“You’re stronger than this.”

And he let go. Removed the bullets and put the gun away. Lived. Today, he told me (and a group of servicepersons) all about it.

Dark and grim, at times. Cut through with truth, foundations and real world exercises in dealing with anguish and stresses. I opened today with ‘This Strange Engine’ (the same version I did for the TED talk). I spoke on relationships, passion, and following the road. “There are no useless cards.”
And I did card tricks.
My topic proved apt as the day progressed. Difficult topics were explored. Hearts were revealed, some in between sessions. I listened and I shared. I was able to boost morale a bit with an impromptu show during lunch.

I made friends with a remarkable group of people …

In the midst of my darkness, there is love. When I was at my lowest, I was sent rescue. Strong friends and positive voices in my head. Sure, it’s ‘kinda woo’, but I have faith in the power of love.

I realize that today’s post is rambling, so let me just say:

Communicate.
Reach out. REALLY reach out.
Love, even those who seem unlovable.
Believe in the unbelievable power of your gift, the unfailing direction of your road.
Damage can be healed.

I’m privileged to be here. Let me say that right up front. Someone recognized that my skill set and personality were right for this and I am glad for the chance to give to those that offered their lives.

The weather is bleak. Just getting here was a chore: dark driving on twisted back roads through heavy rain and thick fog. The day was grey, the town seemed tired and the general feel from the people I encountered was just a deep weariness. As the troops attending came in, I got a sense of grimness. I understand that. Therapy isn’t exactly a party, and three days of therapeutic workshops? Well, it wouldn’t be my first vacation choice.

But … the event is being held in a botanical garden. Big windows look out into a million different shades of living green. 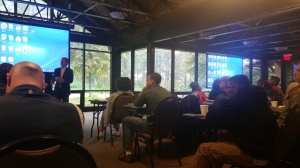 Today I listened to stories both horrific and hopeful. The grey of the sky and the pelting rain made the vibrant greens outside shine and move like Ents dancing. I shared my craft and my heart. I listened and spoke and joked and quietly wept a bit. I saw haunted, tense expressions break and shine with smiles.

I made new friends. They changed my perspective and I … maybe changed their lives.

I do card tricks. Today I did them for heroes.
And from my hands and my heart, I helped them get a little closer to home. Away from the bleak things.

Sometimes on your path you will encounter experiences that will make you ask of yourself: “am I ready?” and “am I worthy?”.
Tomorrow I begin three full days of entertaining veterans at Fort Bragg for the USO. I am charged with providing mirth, heart, and inspiration as they strive to re-enter a ‘normal’ life.
I ask myself :
Am I ready?
Am I worthy?

I do card tricks.